Driving through certain neighborhoods in Chicago, it’s impossible to ignore the billboards emblazoned with the slogan, “This could be your ticket out”, which were erected by the Illinois State Lottery. From the getgo, the intended audience was clearly low income earners, because these billboards are not placed in Forest Hills, a wealthy suburb in Chicago. Ohio’s SuperLotto game marketing plans, actually stated that ads should dovetail with the receipt of “government benefits, payroll and Social Security payments.”

Considering Americans spent $70 billion on the lottery in 2014, which is made more egregious with the knowledge that 5% of players are responsible for 54% of lotto sales. Low income earners are preyed upon by the government, which succeeds in manipulating people’s hopes and dreams of paying for college, buying a home and enjoying financial stability, all to sell false hopes of the lottery system. When people see Powerball winners splashed across the newspaper, it’s easy to understand why winning seems easy and effortless, convincing 38% of Americans earning less than $25,000 income per year, that the lottery is the path to accumulating wealth.

The government has a duty to protect its most vulnerable citizens, but has grown increasingly dependent on revenue generated from gambling, putting its values at odds of promoting a healthy society. It’s impossible to regulate and simultaneously promote an industry, especially one that is a monopoly. State lotteries don’t have any competitors, unlike casinos for example, which compete with other casinos. Governments knowingly push more addictive games on the public, knowing the brunt of this income will be collected from low income earners. In fact, here’s the breakdown of low income spending between 1982 – 1998 with the introduction of state lotteries: 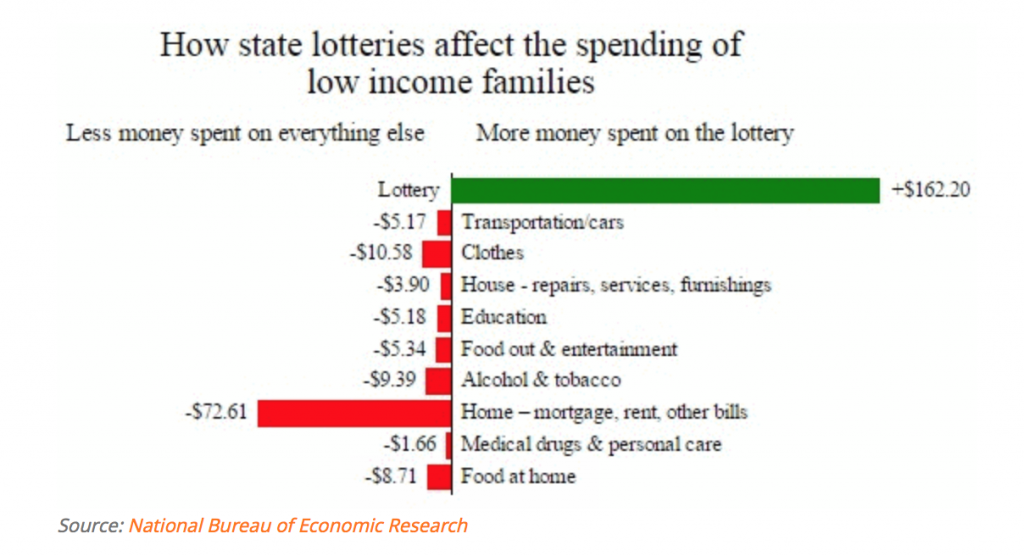 Between 1982 and 1998, 21 states introduced a lottery. This is how low income household spending changed in response. Link to source

At 38%, too many Americans believe the lottery is the solution to their financial concerns. Low income earners need to be made aware of practical, non-exploitative ways to accumulate wealth.

Got a startup idea?